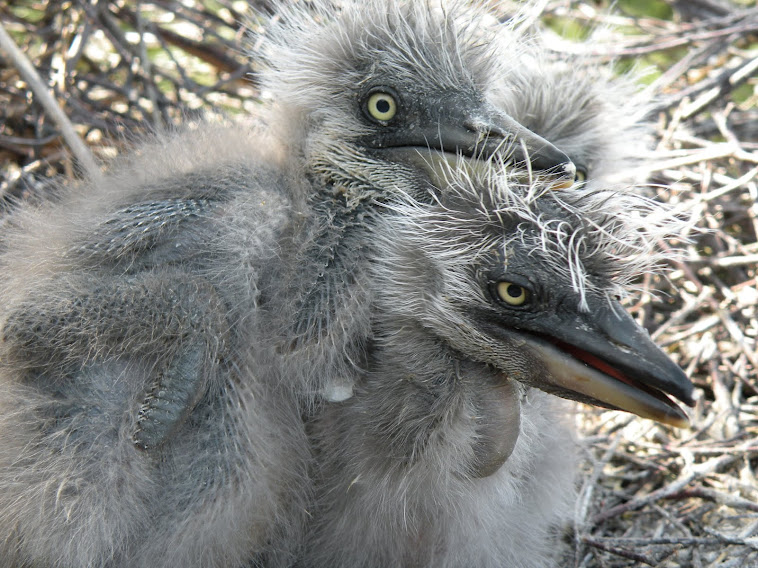 A ringing session on Leith Hill on Tuesday was relatively quiet but turned up this unusual Blackbird.  It is obvious by its active moult that it is a first calendar year bird, still showing some juvenile plumage in its body, tail, flight feathers, primary coverts and greater coverts.  Its all black bill is also a sign of a first year bird. 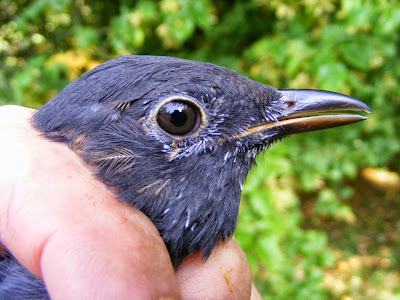 What is unusual is its new adult plumage colour which although is definitely a male has a far more grey than black colouration and the breast feathers are also heavily scalloped with a very pale fringe.  All these features seem to point to this bird being more reminiscent of the continental subspecies sometimes known as 'stockamsel'.  Any comments welcome? 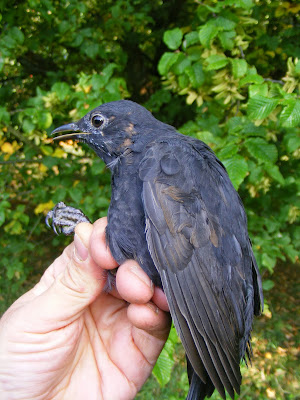 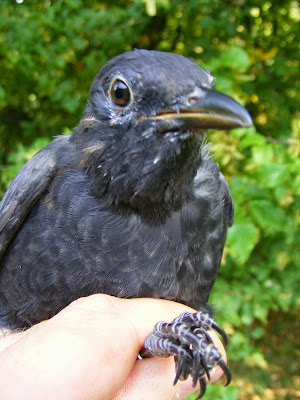 As I write this post, the weather has started to turn and autumn is definitely here!  But after the disappointing summers of 2011 and 2012 this year has been a cracker.  Amazing what happens when forecasters don't suggest we are going to have a BBQ summer!  The last two months have seen quite a bit of change and a few surprises.

I have recently moved house to Broadbridge Heath and although lots to do now moved in I have managed to go a couple of ringing sessions in my new garden.  This has been very interesting with just four sessions of 2 hours with one 30 foot net and I achieved 107 new birds with highlights being an adult Mistle Thrush and singles of 4 species of warbler, Chiffchaff, Blackcap, Whitethroat and Sedge Warbler!

My North River CES was completed with a mixed result with a total of 228 individuals caught over the season.  This is just 20 more than 2011 which is quite surprising considering how much better the weather was this year.  Although it is interesting to note that most species saw a reduction in the number of adults which is probably a knock on effect from the poor season last year.  Most noticeable in Blackbird with just 9 adults caught compared to 14 and Chiffchaff with just 3 adults caught compared to 8.  Blackcap had a very surprising year catching the same amount of adults (13), but just 5 juveniles compared to 25 last year!  It will be interesting to see the national analysis and whether this is the same on a grander scale.

On Leith Hill, my two sites here have been producing well with nearly 600 birds over the last two months, including 5 Redstarts (above), a Spotted Flycatcher and 5 Firecrests.  The latter not so surprising as Leith Hill now seems to be a great breeding site for them, but is interesting to note that in the same time frame just 10 Goldcrests have been caught.  Are the Firecrests taking over?  Certain species seem to be having great breeding seasons as well such as Siskin and Chaffinch, with both already having reached new record totals for here and a long way to go yet.  Compared to 2012, Siskin have reached 363 which is nearly a third more and Chaffinch has reached 203 which I have never reached three figures before!  Great Spotted Woodpeckers are also doing well with 25 ringed here so far this year...!  I have also caught 4 controls in the form of 2 Siskin (first ever summer ones), 1 Chiffchaff and 1 Blue Tit.  The biggest surprise though was an immature Reed Warbler (below) that I caught near the top of the hill, nowhere near any suitable habitat!

What will the rest of the year hold?